skip to main | skip to sidebar

For those who are not familiar with this sculpt, he is one of the Mercenary Pirates from Privateer Press' Warmachine game. In 2012, I was asked to paint a mini for the Clash for a Cure charity auction, raising money for Cancer research. As it is a good cause, and since I had never painted a pirate before, I jumped at the chance to paint this guy. 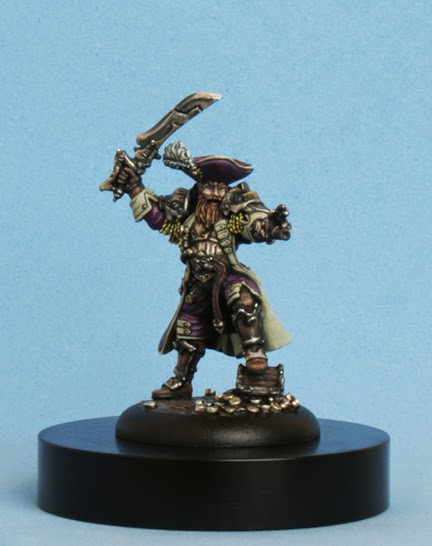 As usual, I used mostly P3 paints on this guy. These paints came out just after I stopped painting for the Studio, and I have been in love with them from day 1. Before these paints were released, we did all of our, now standard, studio colors using custom mixes of Citadel paints, concocted by Mike McVey. For instance, the Menoth colors Sanguinary Base, and Sanguinary Highlight, were originally a mix of Dark Angels Green and Scab Red. To highlight, some Bleached Bone was added to the mix.

Now that I have an "official" line of paints to work with, I really enjoy recreating the studio schemes, and then giving them my own little twist. In this case, my own little twist was to add some texture to the coat and hat, a wash of Battlefield Brown mixed with Coal Black on all the parts of the mini, and using Underbelly Blue in most of the highlights. This ties all of the different colors together in a harmonious way. It doesn't show up in the photos, but in hand, this wash and highlight system gave an interesting tone to all of the colors.

To start, I undercoated the mini black, as usual. I feel that a black undercoat gives my colors a boldness that I really like. I am not a subtle painter, as my influences are comic book and tattoo line art.


Some of the final highlights on the coat and hat were painted in a cross-hatch pattern, to show a little bit of wear and tear, and give some texture. My first attempt didn't really work, because my lines were too thick, so I had to do them over again. Very fine hatch marks look way better. It turned out alright for a first time using this technique, but I can do better next time. 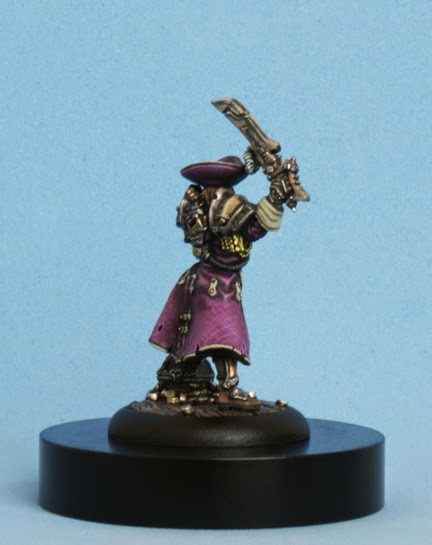 The inside of the coat was painted in a much lighter, contrasting, color. It started with a basecoat of Battlefield Brown, and then a layer of P3 Gun Corps Brown. This gave me a nice solid base to work up from. The midtone is P3 Hammerfall Khaki.This is then slathered with the wash of equal parts Coal Black and Battlefield Brown. I cleaned things up with the Hammerfall Khaki, and then layered on the first highlight of P3 Thrall Flesh. This is like using a bone color, but with a green undertone. The Thrall flesh was given a glaze of my wash mix, and then came the final highlights, an equal mix of Thrall Flesh and P3 Underbelly Blue.

The face, as always, with  basecoat of Battlefield Brown. This is followed by a solid layer of P3 Khardic Flesh. I start to pick out the raised areas with P3 Midlund Flesh.I shade with a thinned wash of P3 Thornwood Green, and then give some life to the skin with a thinned glaze of P3 Skorne Red. The first highlights are an equal mix of Midlund Flesh and P3 Ryn Flesh. This is blended in with another gaze of Skorne Red, and finished with a highlight of pure Ryn Flesh. I was careful to keep the upper part of the face, under the hat, darker than the nose and cheeks, so didn't hit the forehead with the pure Ryn flesh. This creates a bit more realistic look, with the hat shading the face.

The hair and beard also got a basecoat of Battlefield Brown. This was shaded with the Battlefield Brown and Coal Black wash mix, and then all of the raised bits were painted with an equal mix of BB and P3 Bloodstone. This was followed by a layer of pure Bloodstone, which pretty much covered everything but the shading, giving him a ginger look. The first highlights are a mix of Bloodstone and Thrall Flesh at a 2-1 ratio. I began to pick out some of the shape and texture with a 2-1 mix of Bloodstone and Underbelly Blue, the a 1-2 mix of the same. This was toned down with a thinned glaze of Bloodstone, and the final little bright spots were done with pure Underbelly Blue. We now have a ginger pirate.

The golden tassels on the coat are Based with Battlefield Brown, followed by a solid coat of P3 Gun Corps Brown. I started to pick out the ridges with P3 Rucksack Tan, and then an equal mix of P3 Jack Bone and P3 Cygnar Yellow. Next, the ridges get a layer of pure Cygnus Yellow, and the final highlights are a mix of P3 Morrow White and Cygnus Yellow, at a 2-1 ratio.

The feather in Bart's cap was given a basecoat of Greatcoat Grey, followed by a heavy coat of the ws mix to pick out the detail. This was cleaned up with greatcoat Grey, and then the detail is picked out with P3 Trollblood Highlight. Next came a layer of Underbelly Blue, and the final highlights are a 2-1 mix of Morrow White and Underbelly Blue. 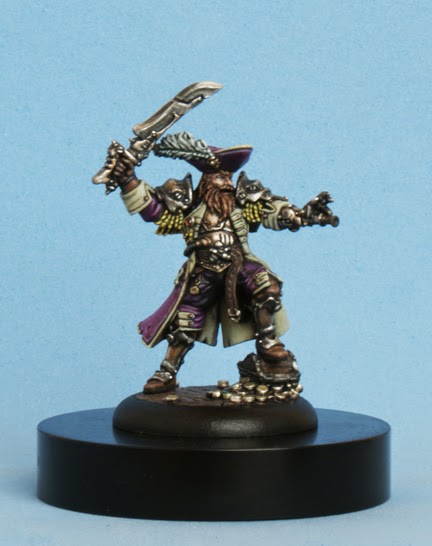 There are three different colors of metal on Bart, steel, gold, and brass. 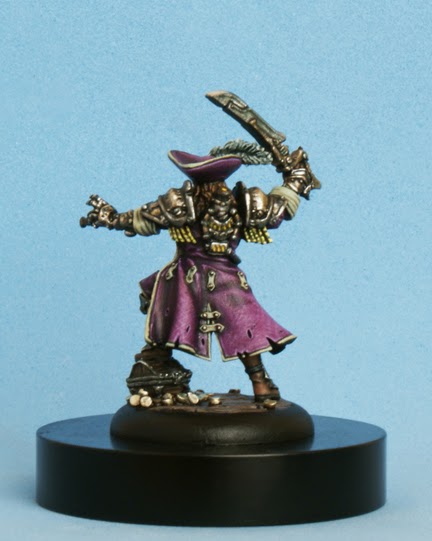 The glow in the furnace of Bart's steam-powered armor is just a quick few layers using the same colors as the gem. Sanguine Base, Skorne Red, Khador Red Base, and Heartfire. The spaces were so small, and forgiving, it was just a matter of layering one on top of the other.

Any random straps holding the armor, or tubing, is based with P3 Thamar. This is highlighted with a quick succession of Greatcoat Grey, then P3 Cryx Bane Highlight, and finished with Trollblood Highlight.

The gem is painted red to stand out from all the purple. The basecoat is P3 Sanguine Base. The bottom half of the gem gets a curved streak of P3 Skorne Red, followed by a fine line of P3 Khador Red Base, and an even finer line of P3 Heartfire. The top quarter of the gem gets a dot of Thamar Black, and is finished with a fine dot of Morrow White.

The treasure chest that Bart stands on was given a basecoat of Battlefield Brown, and the slats were picked out with a layer of pure Bloodstone, and everything was shaded with a liberal coat of the wash mix. The slats are picked out again, but this time with an equal mix of Battlefield Brown and Bloodstone. I started to add some wood grain with pure Bloodstone, and then these lines were highlighted with an equal mix of Bloodstone and Underbelly Blue.

All that was left, was to sculpt an appropriate ship's deck for the base, and make some coins to hide the angle of the base of the chest, as it was sculpted by be slightly buried in the sand. After covering the slot in the base with some tape, which I secured with some super glue, I filled in the base's recess with Greenstuff. Then I made some deep grooves between the planks with my sculpting tool. This was followed by some very fine lines in the planks using an Exacto blade.

The gold coins are simply a "snake" made by rolling out some Greenstuff. When this had cured, I simply cut slices off, and glued them in a pile around the treasure chest. One thing I learned from this first attempt at making coins, is that they should be sliced very, very thin. Learn from my mistakes people;)!

To paint the planks, and make then a slightly different tone from the chest, I started with a solid coat of Battlefield Brown. The planks were given a coat of Idrian Flesh, and then a heavy layer of the wash mix. The woodgrain is picked out with a layer of pure Idrian Flesh, and then a 2-1 mix of Idrian flesh and Underbelly blue. The final highlight is pure Underbelly Blue, which was then toned down with a thinned layer of the wash mix. Finally, I painted all the gold coins in the same way I painted the gold on his armor, but went a lot heavier on the wash.

I had a lot of fun painting my first pirate, and experimenting with using the wash mix, and highlights with Underbelly Blue, to really tie all the colors together.

I hope you have enjoyed reading this, and found a few ideas to try out for yourself. Happy painting!